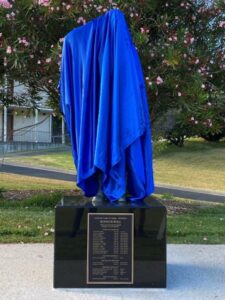 After two and half years in the making, the statue of a cadet at Portsea was finally unveiled.

The idea was originally put forward by Rob de Haas. Unfortunately, he passed away in 2018 but his vision was taken up by a small committee of past graduates with Ossie Kleinig and Paul Asbury being the driving force.

With the concept developed, raising the funds was the next challenge. Pledges were sought from graduates and with a reasonable portion pledged, the process of gaining approvals and creating the statue was commenced.

Finally in July 2020, the last approval was given and building the statue commenced with Everlon and The Headstone Company chosen as the suppliers. The work to finalise the statue was hampered to some degree by the COVID-19 pandemic.

Original plans were to have a large unveiling ceremony which could be attended by as many graduates as possible. COVID-19 meant a significant change to this gathering resulting in the development of the concept of a virtual unveiling. On Thursday 18th March, the unveiling took place and the final leg of the journey could be completed. A video (see below) was created using the footage taken at the unveiling.

A photo album of the launch is available here.

A final report was developed by Ossie Kleinig and can be read here.

The statue is now listed on the Australian War Memorial Places of Pride web page here.

If you are planning a group visit, we suggest you check these tips.

You can see this footage in Standard Definition on YouTube by following this link.

You can also download a High Definition version using this link.

The file is quite large and will take some time to download depending on your internet speed. You may receive a notice in your web browser about the size and/or security of the file. The version uploaded has been checked and is safe.