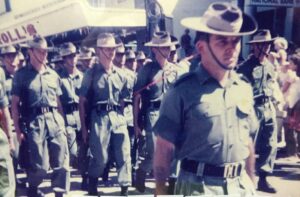 He was posted to 6RAR and deployed to South Vietnam as a Platoon Commander.

On the morning of 21st July, Hines had stopped his platoon for a morning break. During this break troops were listening to a transistor radio and heard about man landing on the moon. He had informed his men of the historical event and returned to his headquarters where unknowingly he trod on an M16 mine. Peter was killed and 18 others were wounded.

Later, a second mine explosion killed the only NCO not injured in the first incident, blinded the Medical Officer Trevor Henderson and seriously wounded the Commanding Officer David Butler (later Commandant of OCS).