In December 1961, Colour Sergeant Milligan graduated from OCS Portsea as Dux of his Class, being awarded the Governor General’s Medal, the Staff Prize, the Field Prize and the Skill at Arms Prize.

He was posted to PIR (Pacific Islands Regiment) as a Platoon Commander, ADC to the Commander of the 1st Division then 2iC of C Company, 5 RAR, on 24 January 1966.

On 13 February 1967, 5 RAR was taking part in Operation Beaumaris and tasked with a cordon and search of An Nhut, a village of approximately 1,000 people, about six kilometres southeast of the Australian Task Force base at Nui Dat.

At about 0900h on the following day the OC of C Company held an orders group. As the members left the group, a member triggered a large explosion from a well concealed mine, causing death and injury. Major Bourne, Captain Milligan and Captain Williams were killed outright and five other men were wounded.

Captain Milligan’s remains were returned to Australia and he was buried at the Northern Suburbs Cemetery, Sydney, on 23 February 1967. 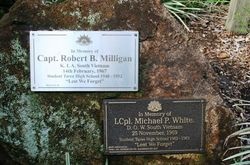