He had a rather unique service history before he entered OCS having enlisted in the Regular Army after completing National Service. The unit to which he was posted after carrying out his basic recruit training was warned for active service in Korea. Graeme was posted out of the unit being underage a few days before it was due to sail and, as such, was not included on the battalion’s embarkation roll. Graeme, however, decided otherwise and took matters into his own hands. He stowed away on the troopship MV ‘New Australia’ transporting the unit, (Second Battalion, The Royal Australian Regiment {2 RAR}), to Korea. When outside of Australian waters he gave himself up to unit authorities, was duly charged, found guilty, fined five pounds BUT was taken back on strength. As a result of these actions, he probably became the youngest veteran at one of Korea’s signature battles in the Battle of the Hook fought with such ferocity just before the Armistice came into effect.

Graeme returned to Australia and remained with 2 RAR. In 1955 the unit was again warned for operational service in Malaya, a country which had been involved in the Communist Terrorist Emergency since 1948. During the latter period of this Malayan service Graeme applied for entrance to OCS. He was accepted into the January 1957 intake. Before entering this twelve month’s course he had qualified as a parachutist. This would lead to a future posting to the Special Air Service (SAS), a unit then in its infancy in the Australian Army. Before this, and on graduation with other December 1957 infantry officer graduates, he undertook a series of short term attachments to his previous unit (2 RAR) then located at Holsworthy on the outskirts of Sydney and subsequently to the Jungle Training Centre at Canungra in South East Queensland before being posted to a national service training battalion located in Western Sydney, NSW.

On completion of this initial officer posting, Graeme took up the appointment with SAS, having passed the tough entrance course before acceptance into this elite special operations unit.

Graeme resigned his regular army commission but when the Vietnam War saw Australian involvement eventuate the “call to duty” once again took hold. He volunteered for the Australian Army Training Team, Vietnam (AATTV) as a full-time Citizen Military Force officer and again embarked on operational service in October 1965.

Graeme was killed in action in an enemy ambush on a steep section of the road between Hue and Da Nang in the jungle-covered mountain pass named Hai Van Pass. This incident which took the life of one of our own is fully described in Ian Mc Neill’s Official History “The Team – Australian Army Advisers in Vietnam 1962 – 1972” published in 1984 (pages 224 to 226). This action is a powerful example of the dangers that Australian Army Team Members worked under in this war.

Graeme has been remembered in Australia by a park named in his honour in Claremont, WA and on the OCS Memorial Wall now located in the Royal Military College (RMC) grounds since the closing down of OCS and its subsequent amalgamation with RMC as well as  Seymour’s Vietnam Veterans’ Commemorative Walk in Victoria. His name is also listed on the Roll of Honour at the Australian War Memorial in Canberra, our Nation’s capital. These are fitting tributes to an Australian soldier who paid the Supreme Sacrifice for his country. 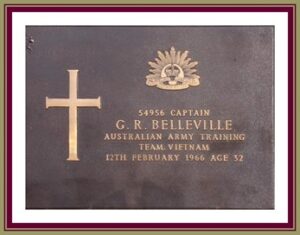 Further information is available from: